VALPARAISO, Chile (03/25/2019) — While others were getting back in their routines following Spring Break, a Trine University student and faculty member went out of their comfort zone to learn about another culture and help others.

From March 9-17, Dawn Moore, assistant professor of marketing in Trine's Ketner School of Business, and Grace Floto, a junior from Angola majoring in management and marketing, participated in a Service Immersion Trip through the YMCA of Greater Fort Wayne.

The pair were part of a group that worked with urban underprivileged youth in Valparaiso, Chile. Service opportunities included construction, repairs and beautification of the local YMCA school and serving meals to the homeless.

Moore said the trip sprang from her desire to personally participate in an international service trip as well as find a cost-effective international experience that would allow students to learn about a different culture from a business/marketing perspective. She attended an interest meeting in Fort Wayne and discussed the idea with Toby Swick, Ketner School of Business dean, to create an independent research study class.

She then hosted an interest meeting on the Trine campus with Francisco Townsend, director of community and global engagement for the Greater Fort Wayne Area YMCA.

"Francisco shared what the trip entailed and immediately I knew I would enjoy the opportunity," Floto said. "I love to travel as well as to serve, so this trip was the perfect combination of both immersing in the culture and helping those in need. In addition to these opportunities, Professor Moore offered the chance to explore marketing in Valparaiso, Chile, in comparison to Valparaiso, Indiana."

Moore said about a half-dozen students were initially interested, but all but Floto were unable to participate due to the timing of the trip. Instead, she and Floto traveled with a group of nine for about 24 hours by plane and bus to arrive at the YMCA in Valparaiso.

They began and ended by preparing and serving meals for the homeless.

For most of the week, the group worked at a K-8 school that the YMCA started in the hills of Valparaiso for children who otherwise may not get a good education. An outdoor play area, primarily used by kindergarteners, suffered from dangerously uneven concrete and peeling paint.

"Throughout the week we used the minimal resources available to us to even out the concrete, scrape the walls then repaint them, and lay turf," said Floto. "On our last day working there, we got the opportunity to meet and play with all the students. We brought games like Uno, Jenga, Twister, Farkle, etc. We also brought prizes and gifts for the school and children such as pencils, paper, candy, stickers, and even some Trine gear!"

When not working, the group got to experience the culture by touring the cities of Valparaiso, Vina Del Mar and Santiago.

"The colors of the city and the street art were breathtaking," said Floto. "Definitely one of my favorite parts was loving on the stray dogs and cats. However, it made me appreciate the shelters and services we have for stray animals here."

Though she was there to serve, Floto said one moment that will stay with her was when one of the children gave something back to her.

"As I was sitting with one little girl, Geraldine, going through her prize bag, I pointed at a Laffy Taffy and told her it was my favorite candy," she recalled. "She then reached in the bag and told me she wanted me to have it. Even though her lunch at school could be her only meal of the day and a treat like candy doesn't come around too often, she wanted me to have it and she wouldn't let me decline it.

"We ended up sharing the candy and all the other children started gifting me with their Laffy Taffy. This made me realize that though these people have little, their hearts are big."

Moore said she is working with Townsend to offer the trip during Spring Break next year so that more Trine students can participate. 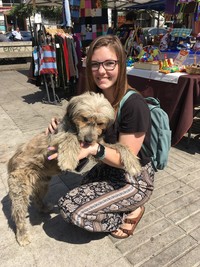 Grace Floto said she fell in love with the stray dogs and cats that were around the cities in Chile. 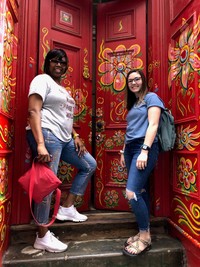 Dawn Moore and Grace Floto stand in front of street art painted on a residence in Valparaiso, Chile. 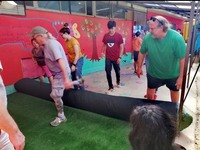 A group from the YMCA of Greater Fort Wayne works on the playground at the K-8 school operated by the YMCA in Valparaiso, Chile. 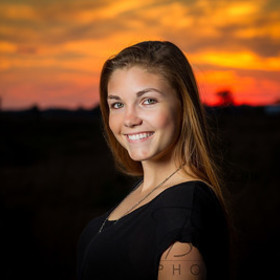